By altering the muscles system,the user able to utilize extreme reflexes and balance. The body is able to contort in various ways, allowing the user to slip through tight spaces or across any terrain, much like a snake. 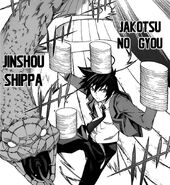 Rintaro using Sōkyoku Wanshō
Add a photo to this gallery

Retrieved from "https://dragonsrioting.fandom.com/wiki/Ry%C5%ABha_Koei_S%C5%8Dgetsu/Jakotsu_no_Gy%C5%8D?oldid=8710"
Community content is available under CC-BY-SA unless otherwise noted.