Kogaku no Gyō (, literally, The Way of the Tiger Frame) is one of the Ways of Ryūha Koei Sōgetsu. By utilising the body's physical strength, the user can use techniques powerful enough to reshape the environment around them. 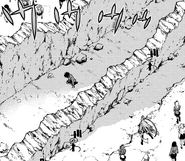 The walls created by Gōhō Hagan.
Add a photo to this gallery

Retrieved from "https://dragonsrioting.fandom.com/wiki/Ry%C5%ABha_Koei_S%C5%8Dgetsu/Kogaku_no_Gy%C5%8D?oldid=5159"
Community content is available under CC-BY-SA unless otherwise noted.